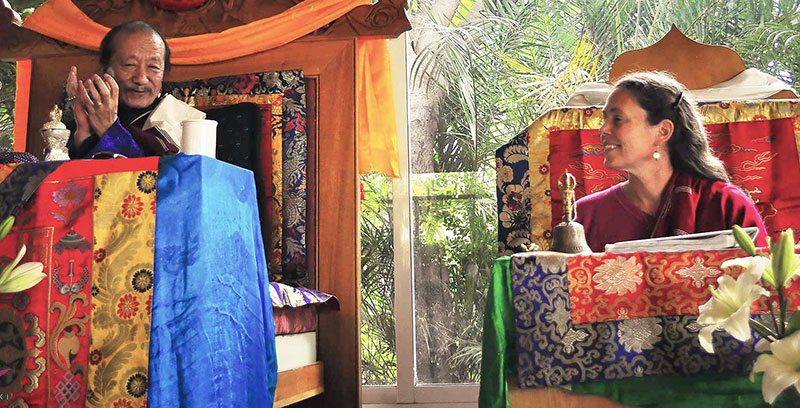 Saraswati Bhawan Publications was founded by Acharya Dawa Chhodak Rinpoche and Khandro Kunzang as a service to provide support materials for students and their practice. It is the publishing arm of Saraswati Bhawan, Inc., and P’hurba Thinley Ling Retreat Center, based in Lansing, Iowa.

In the early days, there weren’t so many translations of practice texts available. Rinpoche and I would work on text translations in between our traveling schedule. At first, it was mostly for my own practices as I wanted good quality texts that included the original Tibetan script, a workable phonetics system for the Tibetan and Sanskrit mantras, and translations that captured the meaning of the practices. Eventually I started to share these texts with other students as their practices progressed. As Rinpoche’s teaching activities grew, we produced more and more translations of the texts he was transmitting and teaching us, including texts for Drubchens and other specialized retreats. Thus, Saraswati Bhawan Publications was born. Over the years, this has grown to a fairly large body of text translations, with only a fraction of it made publicly available so far. More recently, we hired other translators to work on pertinent texts as we were too busy to do them ourselves. Today I still do most of the page layout and formatting, but commission other translators for our current translation projects. I am committed to making this body of work available to practitioners as time and resources permit. It is a work-in-progress and a labor of love. I hope that it will benefit future practitioners by making it easier to access the texts they need for their practices. – Khandro Kunzang

In addition to providing texts, we also provide online teachings in the form of video and audio, and have a small ’store’ to offer more specialized materials for Vajrayana practitioners. We continually add to our collection of translations and media, and the items in the store change, so please check back in frequently, or stay up-to-date with our currect offerings by signing up to be on our mailing list.

FOR upcoming releases, classes and events